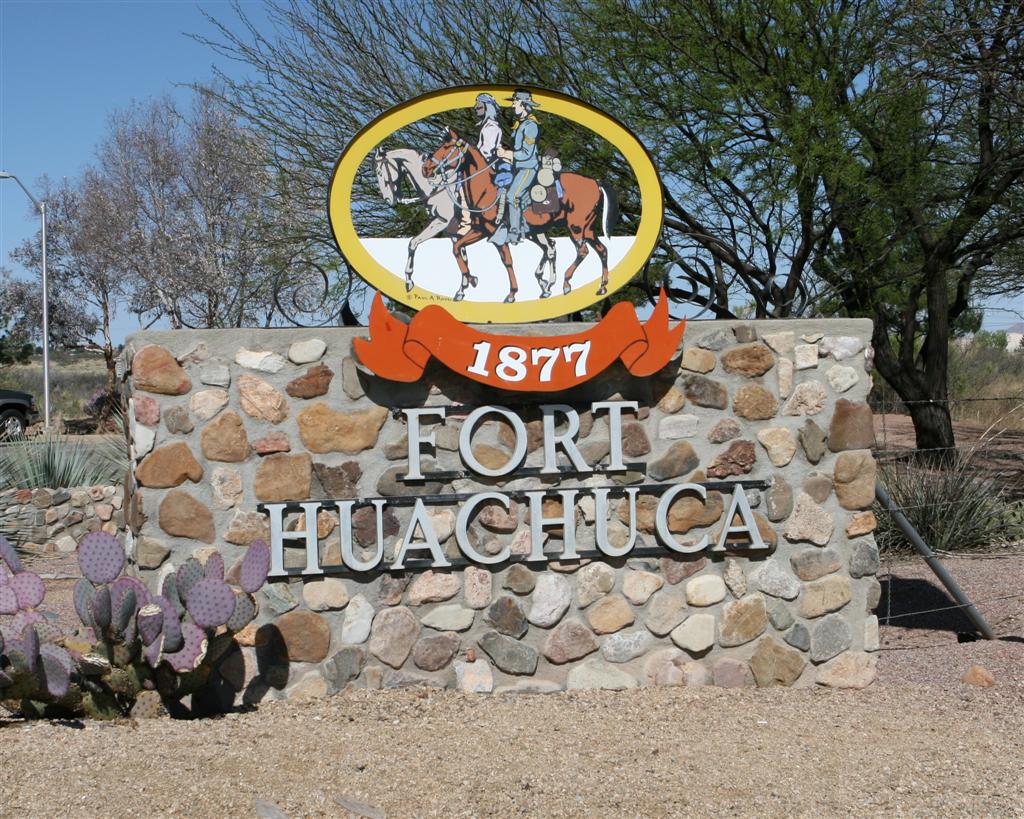 The campsite he selected was at the mouth of the Huachuca Canyon. Here he found fresh water an abundance of trees, and ideal observation points for both the Santa Cruz and San Pedro Valleys. In 1882, Camp Huachuca became a permanent station and was designed a "Fort."

The surrender of Geronimo in August of 1886 practically ended the Apache danger in southern Arizona. Many camps and forts were closed. Fort Huachuca remained open because of its strategic location and, interestingly enough, it’s low sickness rate.

The 10th Cavalry "Buffalo Soldiers" arrived in 1913. They joined General John J. Pershing in his famed expedition into Mexico and, during World War I; they guarded the United States-Mexico border.

When the United States entered World War II, the fort became a training site for two black infantry divisions, the 92nd and 93rd. Troop strength reached 30,000 at a fort which had earlier been described as a suitable area for a brigade-sized unit of about 10,000 men.

When the war ended, the fort was declared surplus and turned over to the State of Arizona Fish and Game Department. What had been an active military post since 1877 now became a preserve for buffalo.

The Korean War saw a reopening of Fort Huachuca when Aviation Engineers arrived for training in airfield construction. Libby Army Airfield was the result of this training.

A new era began in 1954 when control of the post passed to the Chief Signal Officer who found the area and climate ideal for testing electronic and communications equipment. The importance of Fort Huachuca in the national defense picture began to grow from that moment on.

In 1967, Fort Huachuca became the headquarters to the Army Strategic Communications Command which subsequently became the information Systems Command.

In 1971, the Army Intelligence Center and School established its headquarters here. The arrival of these two major commands made Fort Huachuca the major military installation in Arizona and one of prominence throughout the southwest.

Other units stationed on the post include the Electronic Proving Ground, the 11th Signal Brigade, and the Joint Interoperability Test Command.

Fort Huachuca and the local communities, to include Huachuca City and Sierra Vista, have cultivated a relationship over the years which, exemplifies outstanding military/civilian relationships. Recognized by the International City Manager’s Association as one of the best military installations exemplifying outstanding civilian relations, our "super community" of Fort Huachuca-Sierra Vista proudly offers a superior way of life.

The ability of a city and a military installation to work hand in hand is truly evident by the many joint community activities. These include an Armed Forces Day, Family Fun Festival, holiday celebrations and various civic causes. Local events are often highlighted by the appearance of Fort Huachuca's outstanding 36th Army Band and B Troop, 4th Regiment, U.S. Cavalry (Memorial), a colorful, mounted unit which keeps alive the heritage and flavor of the post's early cavalry beginnings.

The story of the U.S. Army in the Southwest unfolds at the Fort Huachuca Historical Museum. Opened in 1960, it has grown rapidly and now houses one of the most representative collections in the state. Throughout the years, its goals have remained unchanged. Simply stated, the museum endeavors to bring to the military community and the general public a heightened awareness of, and increased appreciation for, the colorful history of the southwest by the U.S. Army.

The main museum Hours are 9a.m. to 4p.m. Tuesday thru Saturday. It is closed on Sundays, Mondays, and all federal holidays.